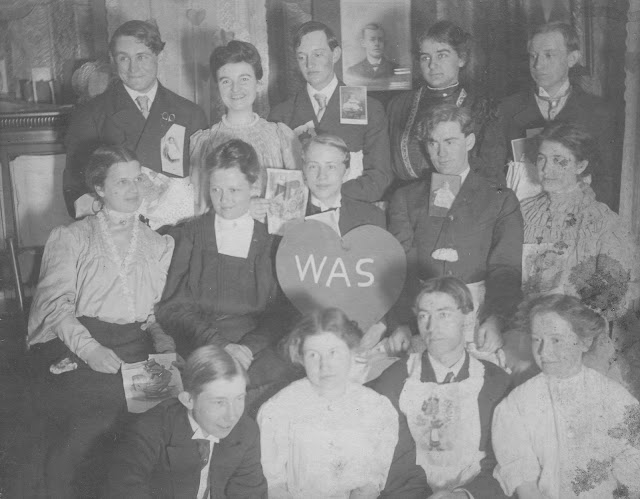 When you first looked at this picture, did you think, "Huh? WAS? Was what?" Well, that was my thought too. Then I looked at the back of the photo and learned that W.A.S. was a social club at the Western Illinois Normal School where my grandmother Ellen and Arthur, her husband-to-be, were students.

Also on the back of the photograph was the inscription "February 14, 1906." Evidently the club was celebrating Valentine's Day—which also happened to be my grandmother's nineteenth birthday!

Ellen is on the far left in the middle row. It is just possible that the young man in front of her is Arthur. He has the same jug-ears that I've seen in other pictures of my grandfather. But this kid hardly looks like he is twenty-seven, which is the age he would have been when Ellen was nineteen. I wish I knew how to use a facial recognition tool and where to get one.

I have so many questions about this little tableau: Is that Arthur? What does W.A.S. stand for? And what's up with the pictures pinned to some of the men's jackets? Pictures of themselves as babies perhaps? So many questions and nobody to ask.
Posted by Melissa Hays at 11:39 PM