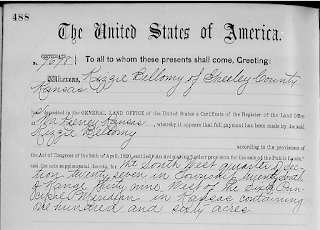 Keziah Bellomy was the older sister of my great-grandmother Lucinda Bellomy Odenweller. I always suspected that Keziah was a biblical name, and Wikipedia told me I had been right. Biblical Keziah, one of Job's three daughters, came to symbolize "female equality" because she received an inheritance from her father—not the usual order of things at the time.

I don't know that my Keziah inherited much financially when her father, an Illinois farmer, died in 1876. But, from the little I know of her life as a single woman of strong character and independence, I can't help but think that she lived up to her name.

Keziah was twenty-six and my great-grandmother twenty-one when they became surrogate mothers to their baby nephew Franklin. His mother had died and his father, their brother James, did not feel inclined to care for his four children on his own. I don't know where the baby's older siblings ended up, but Frank was lucky to land with his aunts.

Keziah and Lucinda, both teachers, lived in their father Thomas's household. Their own mother had recently died, so caring for this motherless child must have been both a challenge and a balm.  When little Frank was nine years old, Lucinda married and took him with her. He continued to live with my great-grandparents until he married at the age of twenty-three.

Thomas died shortly before Lucinda's marriage in 1876, so I suppose the sisters sold the farm. Keziah moved in with her brother Josiah and his family, according to the 1880 US Census.

Then Keziah left her Illinois home and struck out on her own. She went out west, and lived an independent life—mostly as a school teacher and, later on, as a nurse. According to a US Land Office Record, on December 31, 1890 she bought a 160-acre parcel in Greeley, Kansas. So she must have been a farmer as well!

Her obituary tells that she returned to Illinois for the last four years of her life, spending time with family members. This meant nephews and nieces (and possibly some cousins) because, at seventy-two, she had outlived all but one sibling—the brother who had left home to settle in New Mexico.

When Keziah reached the end of her adventurous (but perhaps lonely) life at the age of seventy-two, she was staying with her nephew Harry. It was in the home of Harry's father Josiah that Keziah had lived in the 1880s before her move to Kansas. Perhaps she and Harry had formed a special relationship during that period. I like to think of her passing her final days in the presence of a loving nephew.