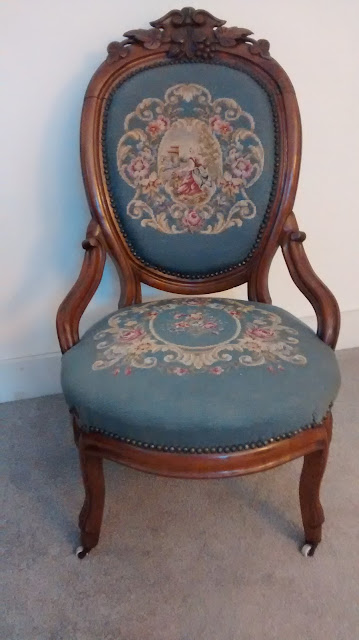 In the living room of our Denver home, a certain high-backed chair held pride of place between the fireplace and the stairway to the upper level. The woodwork of it scrolled and highly polished, the seat and backrest needle-pointed in Victorian fashion, it was a sight to behold. The backrest of the chair featured a portrait of a high-class lady with piled up hair. 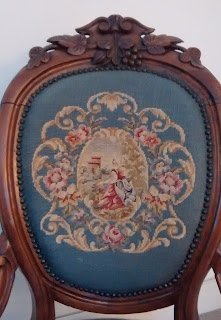 But the great selling point of the chair was the back of the back, which I clearly remember as being sleek, silky velvet—a muted green. My sister Sally and I took great delight in drawing on the plush back with pointed finger, laying down the nap as we traced words or pictures, then miraculously erasing them by brushing over them in the opposite direction. Like ironing without the heat. We sometimes left each other messages on the back of that chair. And they were not nasty, I-hate-you messages. Unlike most of our interactions, this message-leaving activity was one in which we cooperated and in which we both found pleasure. Part of the fun was in seeing how long it took the other to find the hidden communication, because we certainly didn't check every day.

To be truthful, this chair was a bit of a monstrosity. No...that's too strong—an oddity, let's say. In my memory it was enormous, not all that comfortable, and somewhat out of place in the otherwise up-to-date furnishings of our living room. But we loved it—this white elephant/heirloom of ours.

The chair had come to us from Aunt Peg after she died. In fact, it was Aunt Peg's death which had made it possible for Mom and Dad to purchase this new house where the high-back chair was ceremoniously installed. The chair probably wouldn't have been Aunt Peg's choice either, but it was a family heirloom having been needle-pointed by Aunt Frank. (We all referred to her as Aunt Frank, but really she was the aunt of  Daddy and Aunt Peg.)

So, Aunt Peg died and there was Aunt Frank's chair and somebody had to have it. You can't just get rid of a chair that was needle-pointed by your ancestor. And so it resided at our family home until 1982, when Mom and Dad decided to leave Denver for the warmer environment of Chapel Hill—without the chair.

Sally had a three-story house, so her top floor was the obvious new home for it. The chair lived there a good twenty years until Sally moved into a Manhattan apartment, and some things had to go. You guessed it: the chair was one of them. Susan was already trying to downsize, and I was in a house so small that most of the living room was already taken up by my piano. The chair was sacrificed. Later, when I became a hoarder of all things family-related, I was shocked that I could have allowed such a thing to happen. How could I have let practicality trump tradition? I mourned the chair.

But wait!  It turns out that for fifteen years or so, the chair has been sitting, covered by a bedsheet, in Susan’s spare bedroom! It was when I was helping her clear out her house to put it on the market that we uncovered the heirloom. I rejoiced. How could I possibly have thought that we had given up our needle-pointed heirloom? As it must have happened, on that fateful day fifteen years ago, when we were about to consign the chair to the Salvation Army pile, Susan relented at the last moment. She took custody of the chair and has been housing it ever since. I had simply forgotten.

In my memory the chair was of hulking dimensions. In reality, it was small enough to be stowed in my Subaru Impreza hatchback to be hauled home to Vermont. Now, in my newer, somewhat larger house, it sits in the back room— crowded in with the piano. I am waiting for the day that I can pass it off to Abe and his sweetie when they become homeowners and can provide a good setting for the needle-pointed wonder. Maybe they will leave messages for each other on its velvety back. 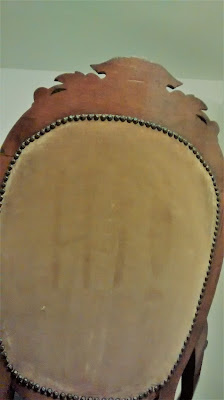 Lovely story. I wrote about a chair too.