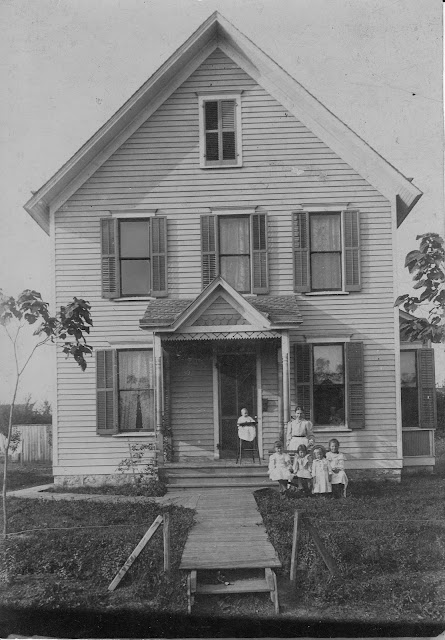 This is the house in Moline, Illinois where my mother's Swedish grandparents lived with their six children. My great-grandmother Stina Ellstrom Ahl proudly poses with her brood in front of the house. If you zoom in on the photo you can see a ghostly figure in the window peering out on the proceedings. That would be Stina's husband, John Albert Ahl. Judging from the few things my mother ever said about her grandfather, that would seem to be in character. From my mother's perspective, he was kind of a loner, sat in his chair a lot reading his Swedish newspaper. It would be like him to literally take himself out of the picture. 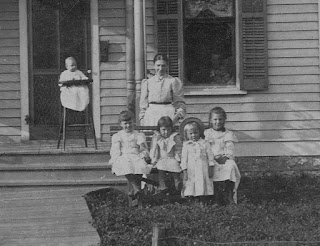 My grandmother Ellen is the frowny little girl on the left. Next to her is her younger sister Lillie. The other girl on the bench is Aunt Phoebe, the oldest of the Ahl children. And the little one in the long white dress standing in front of the bench? That's my mother's Uncle Herbert! On the porch in a high chair is baby Aunt Mabelle. Uncle Leonard has not yet been born, placing this photo in about 1895.

I'm guessing that this house may have become the Ahl family's home shortly before the picture was taken. The newly planted sapling to the left, the somewhat make-shift wooden walkway from the street to the front door, and what might be the beginning stages of a fence—all the kind of projects that new homeowners might undertake. 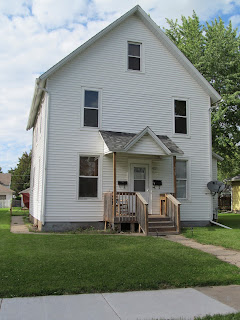 In 2015 I took a trip to Moline to do some family research, and I located the house at 1029 17th Avenue. It was still recognizable in spite of having been turned into a duplex. The center window on the second floor had evidently been sacrificed in the remodeling. Gone also was the detailed trim of the porch and the roof, replaced with skimpier, more utilitarian material. And I'm pretty sure that that is aluminum siding in place of the wooden clapboards on the original house. The sapling either never matured at all and died, or it grew too big, cast too much shade, and was felled. The wooden walkway was replaced with a cement sidewalk. Still, the basic appearance of the old Ahl home is nearly the same almost one-and-a-quarter century later.

what a wonderful photo...thanks for sharing the story of those in it :)

Thanks for your comment, Teresa. I'm glad you enjoyed it.