I have accepted the 52 Ancestors in 52 Weeks challenge, proposed by Amy Johnson Crow of the No Story Too Small website. I'm a little slow out of the starting gate (other “52 in 52” bloggers are on post #8), and I may never catch up but I'm pleased to finally be getting my first post out there. Amy made the suggestion that 2015 be the Year of Collaterals. (A collateral is a person who is related to you but not a direct ancestor.) I am following that suggestion by choosing my great grandfather's older brother to be my first subject.

His name was Guttorm Syverson Gaarder. That is, if what you are looking at is the passenger list for the Benedicte, the ship which brought him here to the US in 1849. Depending on which other records you consult, you would also see him referred to as Thomas Gaarder, G.T. Gothompson, Guttorm Syvertsen or Gutorm Gaarder. In the precious few documents created in his brief life, his name never appears the same way twice. Setting aside the question of what should be considered his “true” name, here is what I know of his history:

He was born in May of 1827 in Valdres (a region of Oppland county in Norway), the first of thirteen children. His mother, Barbro Helgesdatter Aaslie, was just about to turn seventeen years old. His father was Syver Guttormsen Gaarder. The actual day of Guttorm's birth is not known but, according to the Sør Aurdal Parish Register, he was baptized in the Hedalen church on May 14th. He was married, presumably in that same church, about twenty-two years later. Again, the wedding date is not exact—January something—but when they boarded the Benedicte on June 4 1849, Guttorm and Thova Olsdatter were a married couple.

The Benedicte arrived in New York on August 22, 1849 with the entire Gaarder family, and from there they made their way west via the Erie Canal—yes, from Albany to Buffalo—and then across Lake Erie to Milwaukee. In Milwaukee, Guttorm's father hired a team to take them all to Luther Valley in Rock County, Wisconsin.

There they stayed the autumn with Pastor C.E. Clausen who had emigrated some years before and offered hospitality to newly arrived Norwegians. It was in October, in the parsonage in Luther Valley, that Guttorm and Thova's child was born. (Oh, did I mention that Thova was pregnant? Can you imagine traveling by ship, barge, ship again, and finally horse and wagon for three months or more while pregnant?) Their daughter, Bertha Oline, was the first Gaarder child to be born on American soil.

By December the Gaarder/Guttormsen/Gothompson family had found and bought land in neighboring Green County in the town of Albany, had built temporary shelters and settled in. What is curious is that in the 1850 US Census, Guttorm (listed as GT) is shown living with his parents and his siblings, but his wife and daughter are conspicuously missing. (As I am writing this, it is just occurring to me: There had been two other young women, Ingeborg and Berthe Olsdatter, on the Benedicte passenger list, just above the Gaarder family names! What if they were Thova's sisters? What if Thova's whole family came over at the same time? There are five other consecutive, plausible names with appropriate ages. An exciting prospect! But that research will have to wait or I'll never get my first post posted.)

Back to what is known: Syver, Guttorm (who went by “Thomas” in America), and my great-grandfather Helge all farmed on adjoining farmsteads. As far as I can tell, they led comfortable and uneventful lives until 1855, when Guttorm's life was cut short in a farm accident. It was August—haying season. The only account I've read states, “He slid from the top of a haystack and fell on the prongs of a fork which penetrated his vitals, causing death in twenty-two hours.”1  He was twenty-nine. He was buried in the Norwegian Settlement Church cemetery in Albany, Wisconsin. If you look really hard at the top of the well-worn gravestone, you can almost make out the letters forming an arc, spelling the name “GUTORM”. 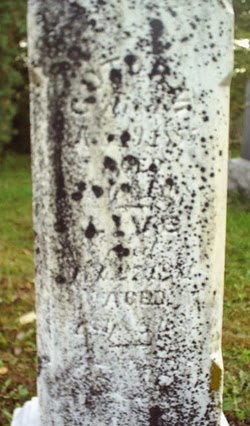