This Saturday, January 31st, marks the 102nd anniversary of my mother's birth.


Rowena Ahl Odenweller.  When we asked her where her parents came up with the name Rowena, all she could say was that she thought she'd been named after the character in Sir Walter Scott's Ivanhoe. (In all my life, the only other Rowena I ever encountered was a young Asian electrologist living in Greenfield in the early 1980's.) Ahl was for my grandmother's maiden name.

When little Rowena was born there was much rejoicing, for she was the very first Ahl grandchild.  My mother may have been the granddaughter of a farmer and a factory worker, but she was born to parents who were both educators. So on top of being the adored  first grandchild, she also had a lot of academic expectations piled on her from the beginning. Here you can see her sitting in her three-year-old-sized chair poring over a book of adult-sized proportions. 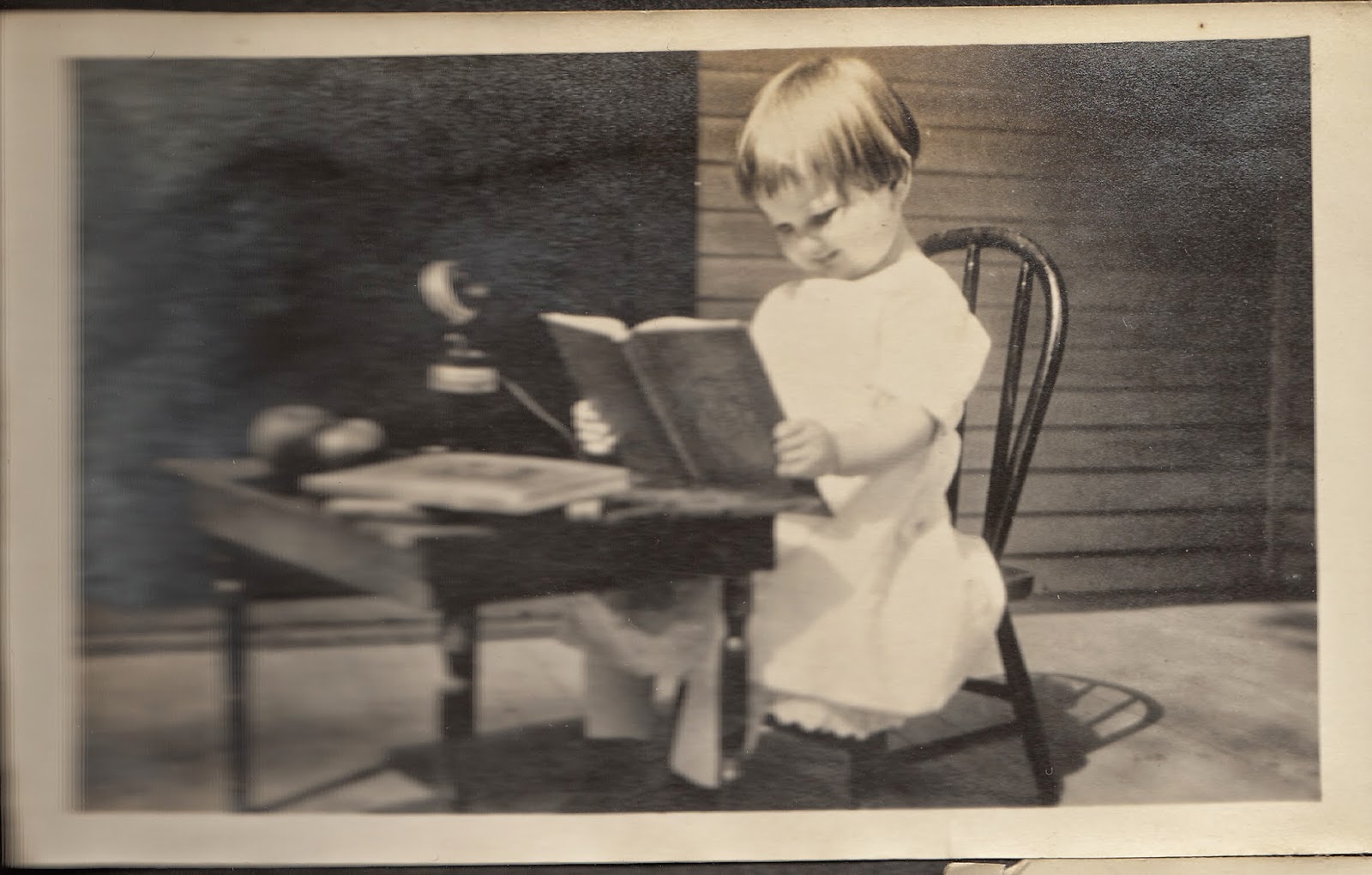 At the age of twelve she won a spelling bee competing against older children, some of them high-schoolers. She took fourth place which also won her congratulatory articles in two newspapers. In a letter that my grandmother wrote to her sister, she described the grueling day which started with a car trip of several hours just to reach the site of the spelling competition. Then, once the contestants had settled in, they spelled from 9 am to 3 pm with only two five-minute breaks and a half-hour for lunch. This was not the stand-up-in-front-of-everybody-and-spell-out-loud kind of spelling bee that we are familiar with these days. Back then, or at least in this instance, the students were sitting at desks and writing the words as they were called out—fifty at a time. Then their papers were collected, anyone who misspelled even a single word was eliminated, and then the next round began. In her letter, my grandmother wrote about seeing one older boy come out of the room in tears after the first round and feeling so sorry for him. Well, my grandmother sat and sat, waiting in the hall for my mother to come out defeated. 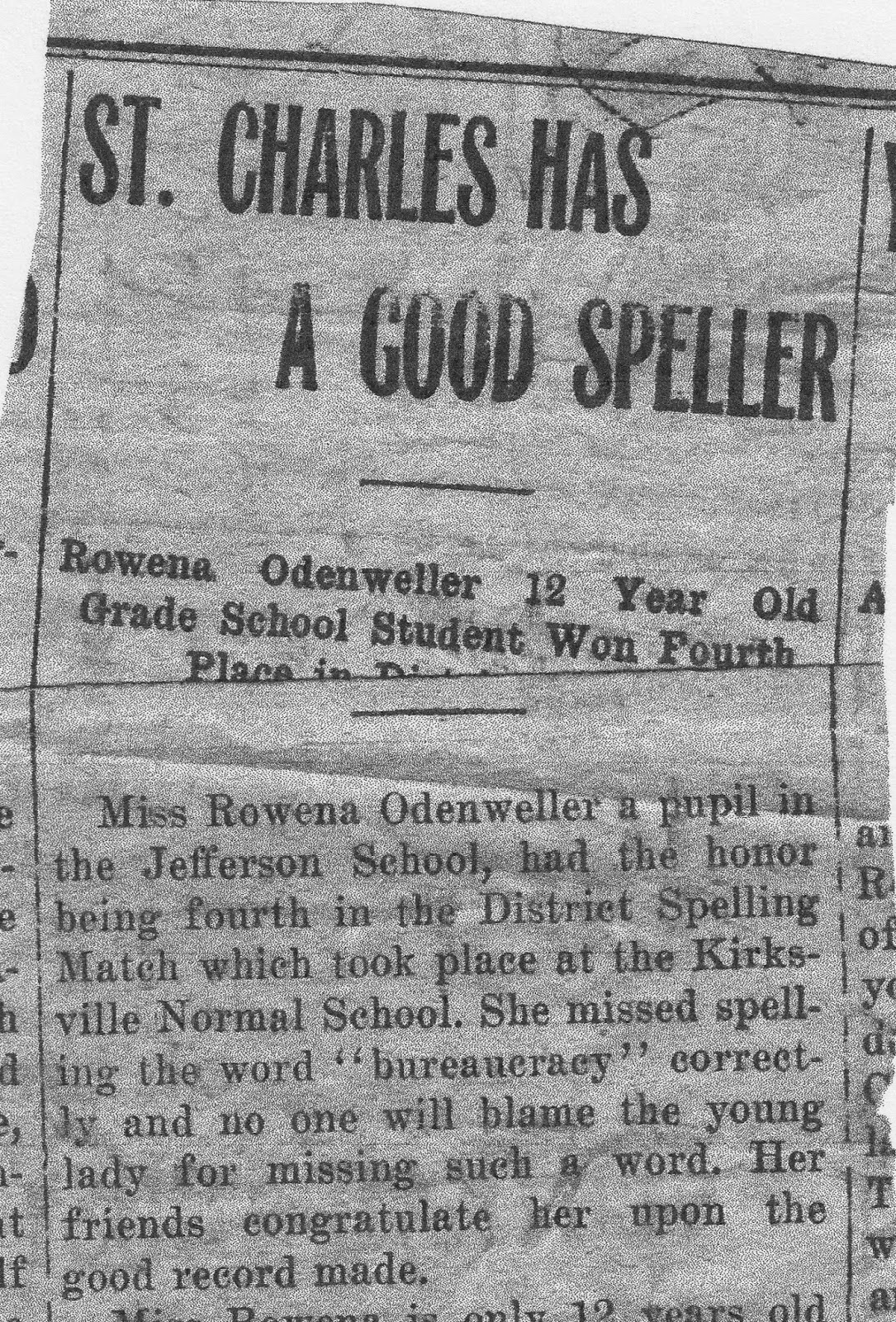 But my mother just kept on spelling. Just kept going until she finally met her Waterloo on the word “bureaucracy” (which I just now had to think very hard about how to spell) and about which the newspaper said “the little miss could easily be forgiven”. So she came out triumphant: fourth place, media attention, AND a five dollar prize.

So how do I know all this? Well, at Christmas, my sister Sally brought me a grocery bag full of photographs, newspaper clippings, albums and letters.  It was the best Christmas present ever, and I've been plowing through the contents of the bag ever since.

In this shopping bag of treasures, I found the baby book that my doting grandmother Ellen kept of Baby Rowena's first year. The title page with the words Our Baby in gilt cursive writing  and the facing page showing what must have been a christening photograph.

This is followed by the Baby's Gifts page which has been filled from top to bottom in Ellen's fine penmanship with entries like “carriage robe from Phoebe” and “crocheted hood from Minnie” and (my favorite)“hug-me-tight from Lydia S”.

Then there is the Baby's First Word page—which proves my mother to be an over-achiever already at the age of eight months with her pronouncement of the word “papa”, followed by “mama” a couple weeks later. Not wanting to stop the account there, Ellen proceeded to record my mother's increasing vocabulary throughout the next six months.

There are other pages devoted to Baby's first outing (in taxi to grandparents' house), Baby's first photograph—meaning, of course, professional photograph—because there is a quite full black-paged album of amateur home photographs recording Baby's every move.  The book documents every aspect of my mother's early life so meticulously that, just in case you wanted to know, I could tell you exactly how much she weighed or how many teeth she had in any given month of that first year.

About that photo album I mentioned?  That was a real find with its depictions of my mother being held and admired by her many aunts, mother in her highchair, mother in costumes, mother playing with her books and toy telephone and many more. But those will have to wait for another day, another post.