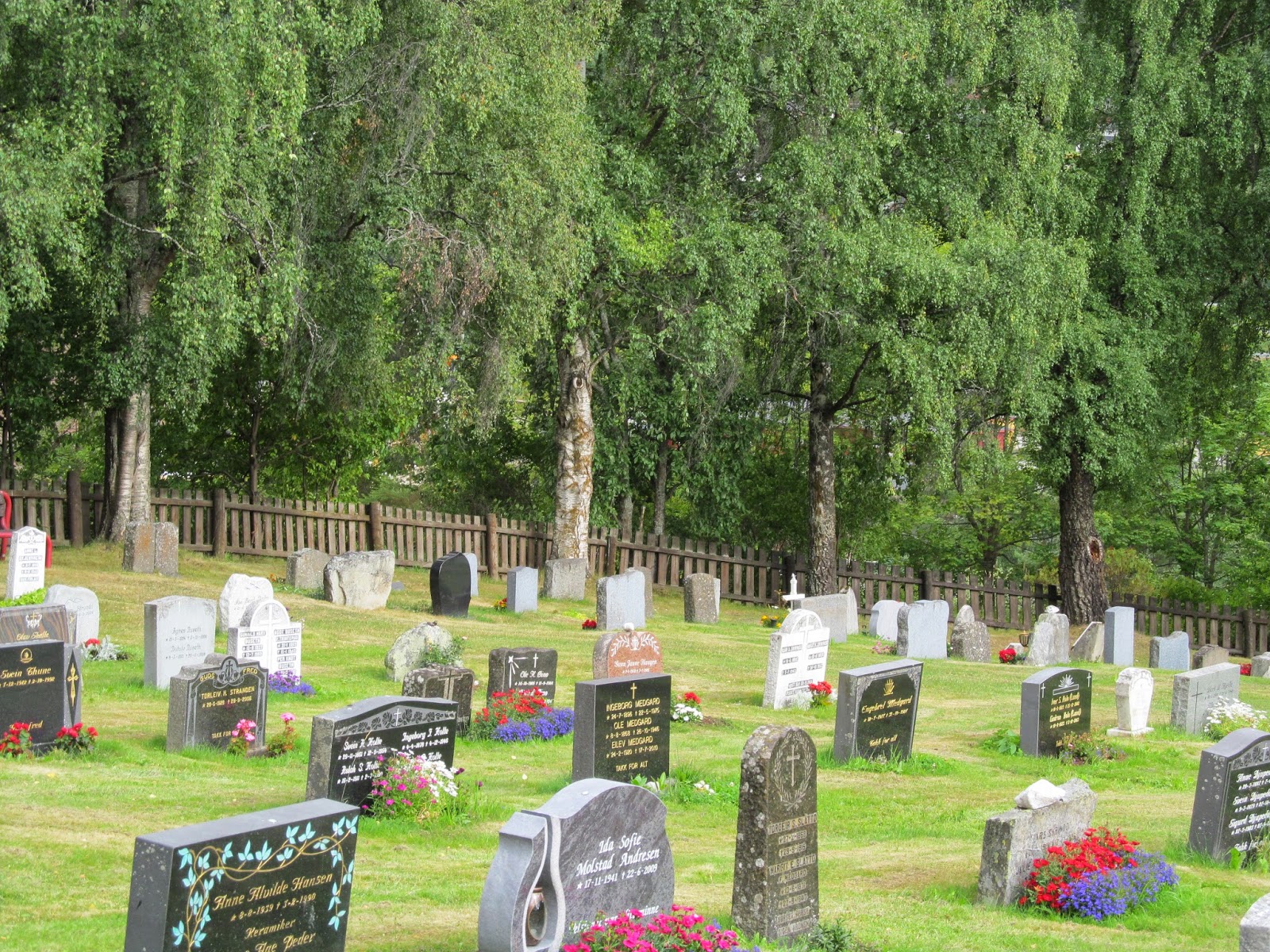 When I was in Norway, I spent a lot of time visiting churches and churchyards. The churchyards were incredibly well maintained by the family members who tended the graves of their relatives. No matter what time of day or what day of the week I happened to visit a church, someone was there at a grave site watering, trimming faded blossoms, planting new flowers, or cutting the grass. 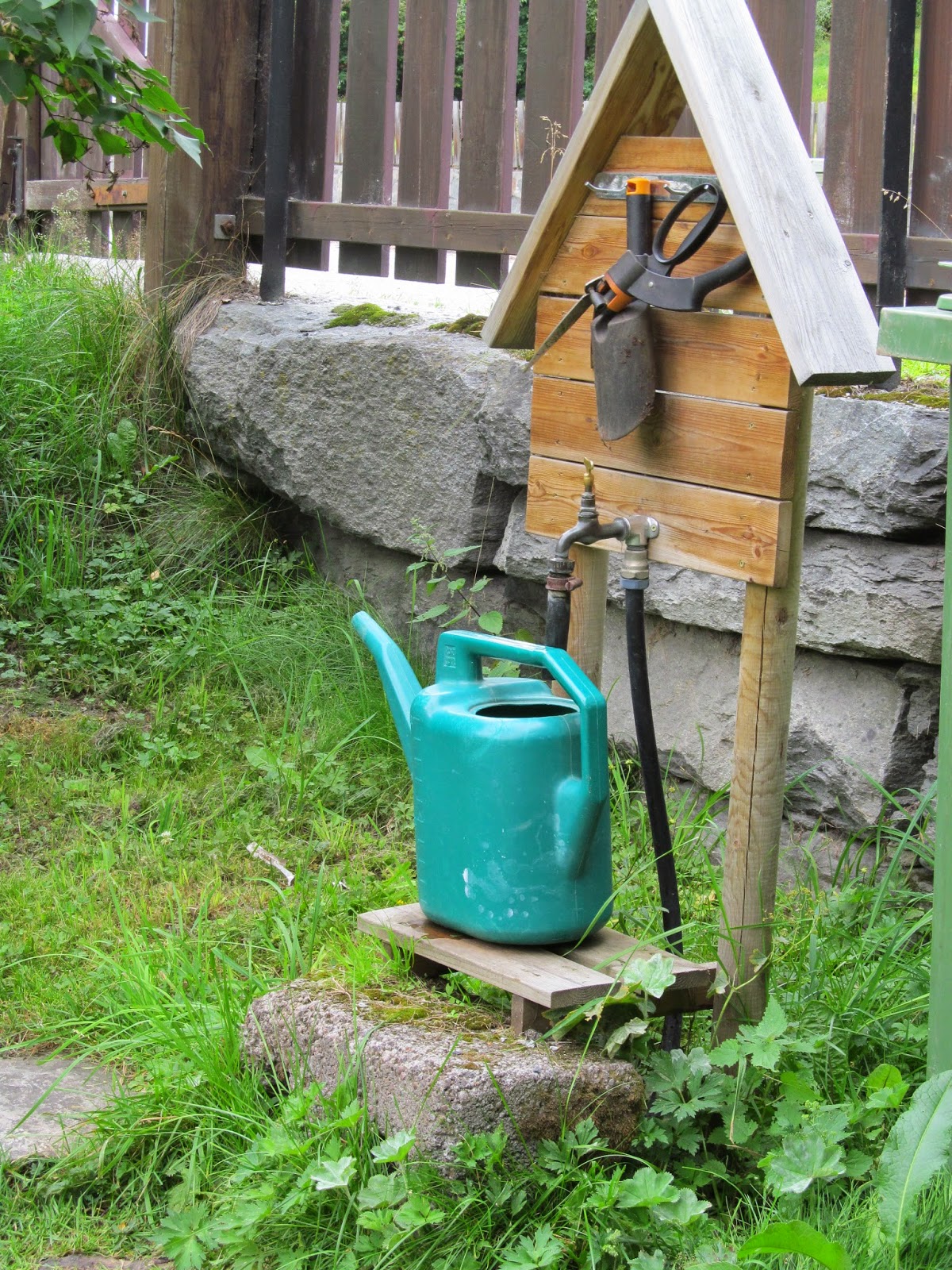 Some grave yards had little grave-tending stations set up with a water spigot, watering cans, a trowel and trimming shears. Sometimes I would encounter whole families cheerfully sprucing up the family graves. One day, late in the afternoon, I saw a woman who evidently had come straight from work. She was dressed for the office, had her handbag with her—and her gardening gloves. She must have thought when she left work, “Oh I have a few extra minutes. On my way home, I'll just stop by and trim around Granny's grave—the grass will be getting a little high.” She was the only one there that day, and it was so peaceful among the gravestones of various design, a gentle breeze tossing the branches of the bushes that gracefully dotted the churchyard. I could see how people would be drawn to spend a little time at the end of the day in the presence of their by-gone companions—and of ancestors they may never have met but had always known through the family tradition of visiting and tending their resting places.


The first time I encountered folks tending graves was the day that I went with three other members of our Valdres ancestor-hunting group—in a car. (After days of being herded on and off buses to visit sites of ancestral interest, it was such a relief to be in a little car with only three people.) One of them, Linda, wanted to go to look at the church in the town her family had called home. Wyonne, the driver, was a Minnesotan who had lived in Oslo for twenty-five years and therefore spoke Norwegian. We arrived at the church to find it locked so Wyonne, who is not a shy person, approached a little knot of people in the churchyard. They were variously watering, weeding and cutting grass. It was a mother, father, a couple kids, and the grandmother. They communicated to Wyonne that the caretaker was away, but maybe his son could be reached. They helped Wyonne call him on their cellphone and she managed to talk him into coming to unlock the church for us. She hung up and announced that he'd be arriving on his motor scooter in ten or fifteen minutes.


In the meantime we hung out and watched the family leisurely enjoying themselves in the beautiful churchyard on that beautiful day. They would take breaks now and then. Sit down on the ground or, in the grandmother's case, on a nearby bench. Chat. Have a snack. Wander around through other sections of the grave yard. It wasn't like they were hurrying to finish a chore so that they could get it over with and move on to a more exciting activity. This was the activity. Occasionally we would all smile and nod and gesture at each other in the awkward, well-meaning way people do when they can't communicate with words.


Eventually Anfind roared up on his motor scooter, grinning and nodding. And then we got our own personal tour of the church, with Wyonne relaying our questions to him. Then Linda, Floyd, and I would wait forever for her to do the translation of his answers. We had to be patient, partly because she would become so involved in the conversation with the very entertaining Anfind that she would forget we were waiting. And partly because she couldn't get him to stop talking—he was having such a good time telling her stories and jokes. So the two of them were having a knee-slapping time while we stood by, watching and laughing. Periodically we were let in on the fun.


We found out that Anfind and his father (who was in his 80's) dug the graves by hand. When he wasn't digging graves, we wondered what else Anfind did.

Anfind: Well, I get the church ready for weddings.
Us: How do you do that?
Anfind: Oh, I set up the chairs at the altar.
Us: Show us how!


So he demonstrated and described how the whole wedding was conducted. In the beginning of the ceremony, the chairs are set so that the bride and groom face each other across the aisle in front of the altar. After they make their vows, the groom's chair is moved so that he and his new wife are seated next to each other, symbolizing their new union. When we learned about that part, we made Anfind move the chairs side by side so that Linda and her new husband could sit next to each other. And then I took a picture of the seventy-something newlyweds. Next, Wyonne asked Anfind if, since Floyd was a pastor, she could take a picture of him standing up in the pulpit. Of course the affable Anfind agreed and smiled and laughed along with the rest of us as Floyd gestured from the pulpit. We all had such a good time. We hated to say good-bye. But we had other churches and churchyards to visit—and it was Anfind's day off. So we smiled and nodded and waved him off on his motor scooter. We said our good-byes (ha det bra), and our thanks (takk) to the grave-tending family and then piled into the car to continue on our way.