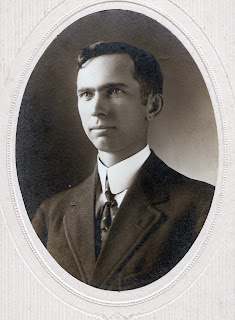 My grandfather, Arthur Leonard Odenweller, got off to a slow start in what turned out to be a long and productive career in education. By his own account, he was a sickly child and as a consequence he missed quite a number of school days in his early education. But he was bright and determined and so he easily handled the work offered in the Schuyler County (Illinois) public schools.

He went on to complete a business course at the Rushville Commercial School, also known as Kennedy's Normal School. He and his younger sister, Eula, overlapped in their studies there, and they are shown together in this class photo. He graduated in 1900, she in 1901.


In 1902 their mother died, and the following year Eula herself died in a horse-and-buggy accident. Arthur, also in the buggy, survived. Perhaps the pain of these losses made it difficult for him to focus and find his direction. I don't know the exact timing of events, but I do know that at some point after his business course, he spent time at Eureka College. It evidently was not to his liking because he only stayed one year. What did he do to fill the years between Eureka and his next academic attempt? Maybe his father needed him on the farm? As puny as he was, it's difficult picturing him doing physical labor, so maybe he helped on the management end of things?

It wasn’t until he was twenty-six years old that he enrolled at Western State Normal School in Macomb where his younger brother was already studying. Claude graduated ahead of Arthur.

It was there at the Normal School that Arthur finally seems to have found his feet. Not only did he meet my grandmother there, but he was quite taken with the education program which had a strong focus on developing curriculum for rural schools. He and Ellen both graduated from the two-year program in 1907. Here are their photos as they appeared in the school’s yearbook, the Sequel. 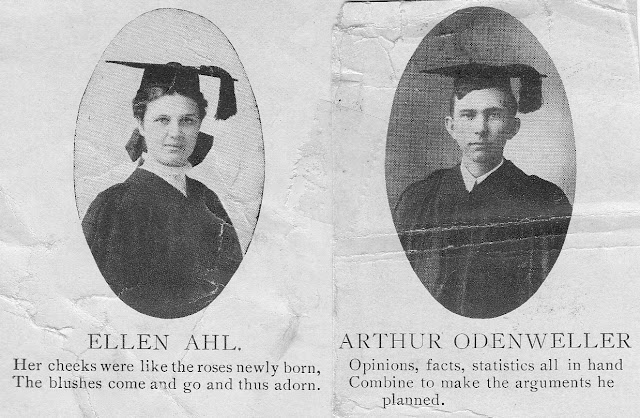 They both went on to complete another two-year course of study in Macomb. According to their profiles in an exceedingly long-titled book(1),  Arthur received “an advanced diploma—in recognition of his excellence in teaching.” Ellen was awarded “an advanced diploma for superior excellence in teaching.” (Emphasis mine.) Guess who went on to become a teacher, principal, and superintendent while the other kept house and raised their two daughters, working intermittently as a substitute teacher. But this did not happen immediately.

First of all, straight out of Western State Normal, Arthur landed a job as teaching principal in the little school in Pleasant View near the town where he had grown up. This was followed by other teaching or administrative positions in other Schuyler County schools for a couple years. Finally he'd worked his way up—both administratively and geographically speaking—to Henry County to become the superintendent of schools there. Rock Island County, where his sweetheart lived, was just north of Henry County and I'm sure it was all part of their plan. They were married in 1911.

The timeline after this gets a little fuzzy for me. I'm depending on my memory of what my mother told me about the course of events. I believe that Arthur felt the need to get an advanced degree, and so he went to New York City to the Teachers College at Columbia University for his master's. Ellen, not wanting to uproot my mother and my aunt, stayed behind at her parents' house in Moline. According to the 1920 Census, my grandfather had found lodgings at a boarding house with forty-four other boarders!

He must have left New York right after the census, because an article in the Davenport Democrat and Leader stated that he had been the principal in Davenport (Iowa) schools between 1920-1921. He then served as superintendent of schools in Belleville, Illinois, leaving the position in 1924 when he was appointed head of the education department at Lindenwood College in St. Charles, Missouri.

So things were looking good, it seemed. The family was together and he was moving up. But after three years, the administration at Lindenwood let him know that to continue there, he would need to get his doctorate. So off he went, leaving his family again, and spent the next several years researching and writing his dissertation—this time at the University of Chicago. According to my mother, even though he had complied with Lindenwood's requirements, when he came back his job was not there! I think it had to do with the Depression. The only job he could find was as a night desk clerk at a hotel in Chicago.

It may have been at that point that Arthur and Ellen decided to start their own school. (Did you see how I did that? How I worked in a second “start”?) By this time, both daughters were out of the house, so Ellen joined Arthur in Chicago. They called their new venture the Chicago College Preparatory School. They taught together until her sudden death at the age of fifty-three. He soldiered on alone for several years after that, but I think that eventually the number of students feeling the need to prepare for college dwindled. He took on a second job working at C.G. McClurg, a Chicago publishing company. My sisters and I were happy with this arrangement because it meant that he sent us children's books, the most memorable being giant (three-foot-tall, two-foot-wide) Dick and Jane books. We only met our grandfather a couple of times, we each received a few letters from him—kindly, formal, reserved, over our heads. But the Dick and Jane books were with us for many years and never got old.

(1) Educational History of Illinois, Growth and Progress in Educational Affairs of the State from the Earliest Day to the Present, with Portraits and Biographies, John William Cook, 1912.

What a great accounting and so beautifully written! Thank you for sharing!

Thank you so much. I really appreciate your comments.

We look so casual compared to our ancestor photos, for which which I'm sure they dressed and posed. Nice integrating the records, recollections and old photos.