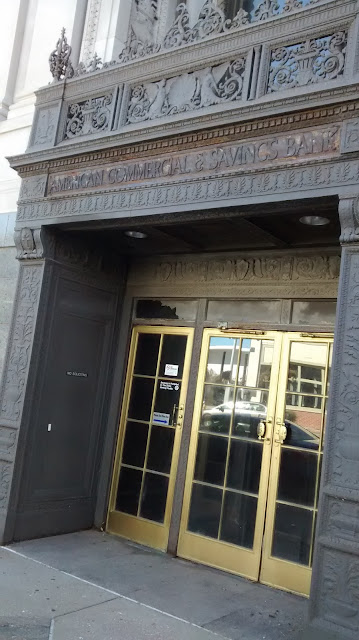 This morning I visited the Davenport Bank and Trust Company where my father worked as a teller before he met Mom. I think that during the time Sally and Susan were little he moved up to a position in the trust department.

On the last night of my 2015 visit, my Airbnb host had driven me over to see the elegant exterior of the classic structure. He told me the bank space was empty now but if I ever came back to the Quad Cities, I should go to the bank during the daytime and ask to see the inside with its impressive murals.

Easier said than done. When I showed up today, it was locked up tight and nobody was around to ask for information. After a little hunting, I spotted three people in a soulless glassed-in lobby annexed to the original bank building. It was locked too, but I rapped on the glass of the double doors and interrupted the woman who apparently was giving a briefing or making a pitch to the two men. She came over and we talked through the crack between the doors. At first she told me the old bank was not open to the public. When I told her that my father had worked there, she grudgingly agreed to let me in if I would go to the entrance on the other side of the building. 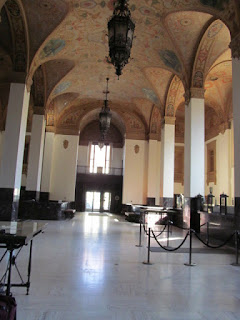 I gratefully scurried around the corner to be admitted to the cavernous space. The woman had brought the two men with her and they continued the briefing in the hallway just outside the bank—with the door open so she could keep an eye on me.

A little self-consciously, I roamed around taking photos of the soaring vaulted ceiling, the mid-western-themed murals, the intricately scrolled chandeliers, the tellers' windows with their grills. So many tellers' windows! Probably ten or twelve of them. 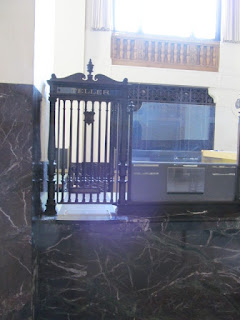 I tried to divine which one my father had stood behind. But then maybe the tellers didn't have permanently assigned windows. Maybe they rotated on a predetermined schedule. Or maybe there was one plum window that they all vied for in a free-for-all, first-come-first-served fashion. Or maybe the plum window was awarded to a particular teller in recognition of exceptional performance. And conversely, one dreaded window—a window that attracted the most demanding customers—may have been assigned to a teller as punishment for some infraction. 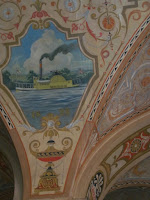 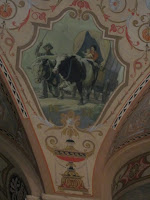 I pulled myself back from my wool-gathering to focus again on my father working in that space. Did he marvel  at his luck to have a job in a veritable museum? Did he look forward to going to work so that during down-times he could study the paintings and admire the abundance of stenciling and scroll work? Or, as it happens with any daily routine, did he cease to notice his surroundings? I never heard him say. 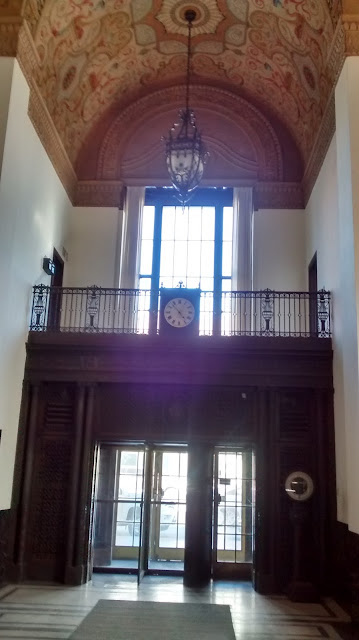