The Flag in the Closet 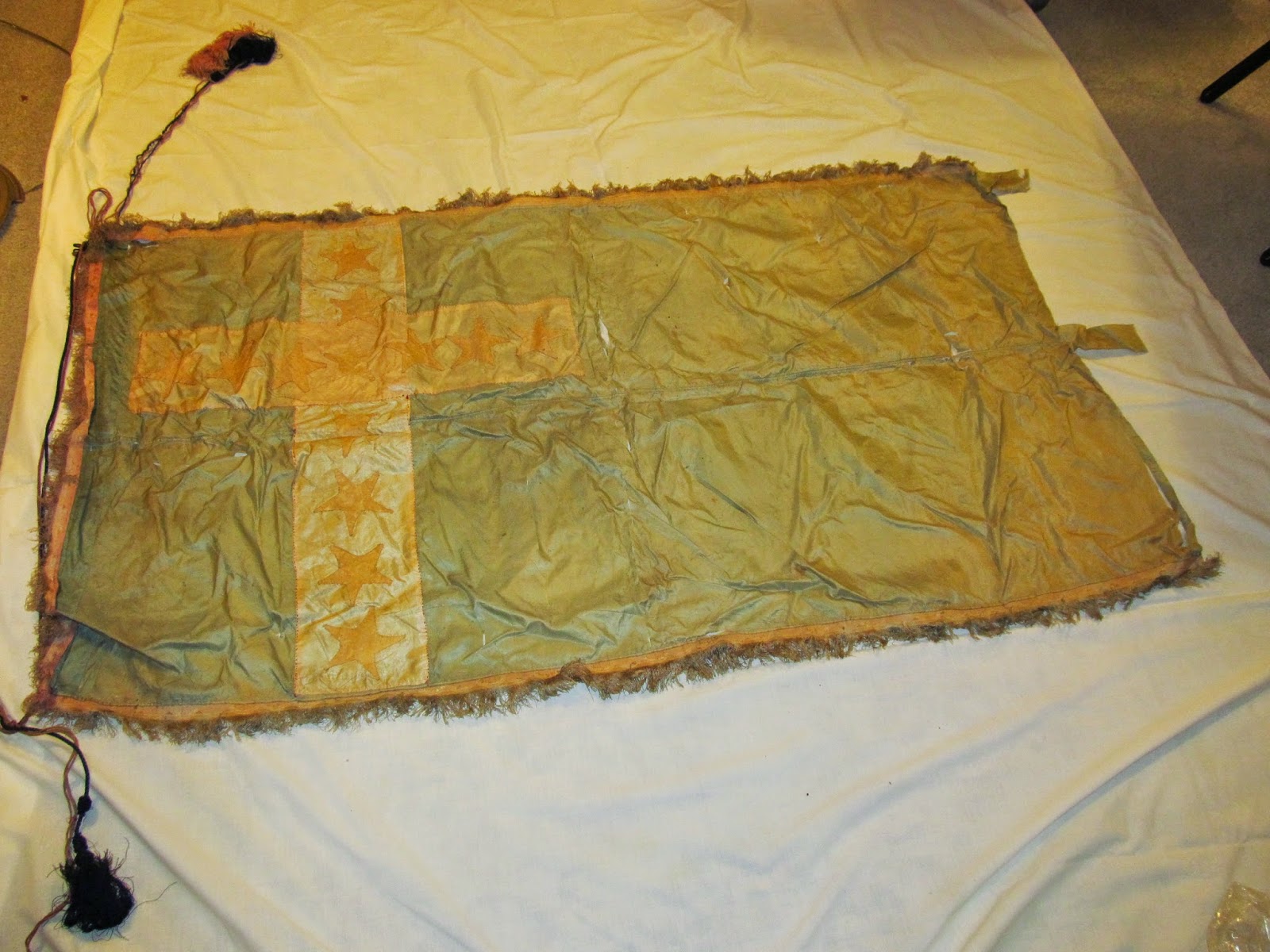 Okay--this is going to be a long post.  A friend of mine who blogs says to keep 'em short or people won't read to the end.  But I've noticed the length of entries on other genealogy blogs and it appears that genealogists have a long attention span.  So here is something I wrote back in January in my weekly writing group:


Yesterday I spent a good deal of time trying to track down the location in East Tennessee where my great grandfather was engaged in a “fierce cavalry battle”. Until now, it has not been that important to me to know the name of the town or exactly which Confederate regiment he was battling with. It was enough for me to have the gist of it—there was a battle, his side won, and (the most important part to me) the flag that he captured is sitting in the closet in my guest room.
The reason I surprisingly found myself scouring the internet for East Tennessee cavalry battles, is that First Sgt. Bill Lear, the curator of a military museum in Illinois, wants to know if I have any more details about the flag: Do I know where exactly it was captured? Do I know when it was captured? What unit did it originally belong to? It's gratifying that he is so very excited to hear about our flag and I don't want to disappoint him—I really do want to give him the answers. But I gave him everything I know already, gleaned from the fragment of a newspaper clipping, a brief entry from a family history written by his younger brother, and a paragraph about my great grandfather in a history of McDonough County, Illinois. Oh, and the vague memory of my father telling of his grandfather's war story—how Charles Carroll Hays was himself captured by the enemy, was being marched over a bridge with his fellow soldiers to the infamous prison in Andersonville when he managed to drop down under the bridge and hide there until they had all passed over. Then he made his way back to where the rest of his regiment was—a two-day trek.
Over the years, my sisters and I have wondered what we should do about this flag of ours but never got any farther than wondering. Recently, my niece asked my sister about the flag and was perturbed with the answer, expressing the opinion that a civil war flag “shouldn't just be sitting in a box on a shelf in a closet”. She was right, of course, so with a little internet research my sister and I found a website devoted to the history and preservation of flags from the Civil War. There we learned that Illinois has a military museum where they store flags in “a humidity-controlled environment.” Hmm—could this be the final resting place for our flag?
A little history. Evidently every regiment had its own flag which it carried into battle—both to invigorate and encourage its soldiers, and also to help them find each other if they got separated during the fighting. So my great grandfather's flag is the one that was being carried by the regiment he was doing battle with. According to the dog-eared, disintegrating newspaper clipping, he captured not only the flag, but the captain of that company and some of its soldiers.
At Christmas, my sister, my niece and I decided to unfold the flag and determine the degree of its disintegration. With trepidation we lifted it from the box where it had sat for at least my lifetime and began to delicately open it. There were tassels that had become tangled, so that required special attention.

From cut-up strips of their own silk dresses, Confederate women had stitched this flag for their men to carry into battle. We had expected to find the silk fabric to be crumbling and frayed. It wasn't as bad as we had feared—a few tears here and there, but mostly intact. Faded, yes—a quite pale green background with an even lighter cross against it, pinkish stars stitched onto the cross. The whole flag measured 29 x 53 inches. We took pictures of the flag and then, instead of refolding it, we gently rolled it into the bed sheet we had used to spread it out on. (My sister had been the archivist at a historical society so she knows about proper treatment of artifacts--folding is bad.)
The next step was to contact the military museum that was described on the website to see if they would be interested in giving a good home to our flag. As I wrote an email to some faceless, unknown curator, part of me was thinking, “Oh, they're probably always getting inquiries from people who think they have something special.” Another voice said, “Oh, maybe they'll be really excited. Maybe they'll send some official team to come collect it and carefully transport it to their humidity-controlled environment. Maybe they'll display it with a copy of our dog-eared newspaper clipping!” Another thought was, “Don't be too disappointed if you never hear anything, or get a 'delivery failure' notice. After all, this website was created in 2002 and maybe nothing of this even exists anymore.” So when I got an instant reply, I was ridiculously elated.

Now, in spite of myself, I have gotten curious about the exact battle, the exact captain (I know his name was Marshall), the exact origin of the unit. After a day of searching, I'm no closer to any answers, but maybe with the resources of the Illinois Military Flag Museum, more will be revealed. I eagerly await further word from Sgt. Bill. Until then, the flag lies—rolled, not folded—on the shelf in my guest room closet.
Posted by Melissa Hays at 4:10 PM